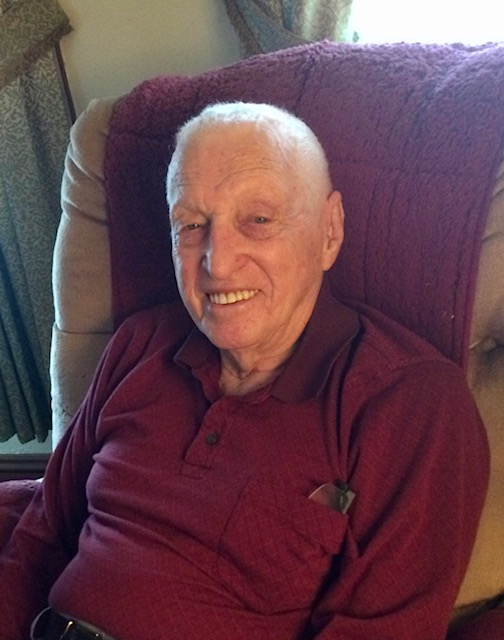 Gerald David Jayne, Born in Easton, PA on December 7, 1924 was the son of Nancy Castner Jayne Bocchino and David Edward Jayne. He was the Stepson of William Bocchino and Violet M. Jayne. Gerald grew up in New Village, Broadway and Washington, NJ.  Gerald married A. Joyce Jayne on December 6, 1947, and they were married 47 years, until her death in April 1994. He graduated from Washington High School in 1942.   During High School he worked at Jensen's Soda Shop, where the teens gathered to dance and socialize.   He also was a member of the Tennis and Basketball Teams. Following High School, Gerald worked at Ingersol Rand for one year, before enlisting in the US Navy, during WWII. Gerald served in the US Navy from 1943 until 1947. He was an Armed Guard Gunner (Sitting Duck) on a Merchant Marine Ship in the Pacific Ocean, traveling back and forth from Austrailia to California. He also carried Army troops and Marines to islands in the Pacific.  Often the navy men had to remain on the ship, when they docked, because they did not own dress uniforms.  Following his time in the Navy, Gerald lived in Plattsburg, NY for two and a half years, while installing tile with some WHS buddies. In 1950 he returned to Washington, NJ and continued working at Ingersol Rand, in Phillipsburg, NJ, as an expeditor. He worked there until his retirement on June 31, 1986. Gerald also worked a few years at Arena’s Pharmacy.  He was a member of the First Presbyterian Church and served as a Deacon for 8 years. In his 80’s, Jerry enjoyed playing in the church Quoit Tournaments and sometimes ended up being the champion.  He participated in Washington's Bicentennial Celebration as a member of Rush's Brushes, who sported their beards and rode in a train float, in the parade. Jerry was an avid Fairway golfer and was often seen walking  three miles, around town.  Jerry bowled on the Men and Mixed leagues at Oakwood Lanes.  Gerald was a family man, who turned down job opportunities, to remain in the Washington area to keep his family “close”.
Gerald is survived by his four children, Penelope Arlene Atkinson (Rik), Nancy Althea Edwards (Gary), David Gerald Jayne (Linda) and Gregory Ellis Jayne (Linda). Twelve devoted grandchildren (Rebecca, Derrik, Melanie, Joshua, Melissa, Garrett, Wade, Raymond, Andrew, Kelly, Sarah, Matthew) and eleven adored great grandchildren (Erik, Leo, Jack, Emma, Eviana, Riley, Ava, Connor, Landon, Myla, Raymond).
Relatives and friends may gather with the family on Saturday, February 22, 2020 from 10:00 AM until 1:00 PM at Knoll-DeVoe Funeral Home & Cremation Service, 142 W. Washington Avenue, Washington, NJ 07882. A service of remembrance will be offered by Pastor Jim Scovell at 1: 00 pm at the funeral home. Interment with Navy Honors will be held at Pequest Union Cemetery. For further information or to share memories with the family please visit www.knolldevoefh.com

Share Your Memory of
Gerald
Upload Your Memory View All Memories
Be the first to upload a memory!
Share A Memory
Send Flowers
Plant a Tree