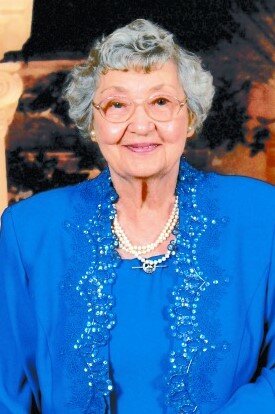 Constance Myrtle (Griffiths) Rhinehart, of Washington, NJ, was welcomed into her final home in the Kingdom of Heaven on Monday, May 9, 2022, with her daughter, Chris with whom she resided, at her side.  She was born on November 2, 1927, in Lichfield, Staffordshire, England and the only child of the late Jack and Myrtle Griffiths.

She spent time as a child in Hong Kong, and Egypt as her father was stationed in the Welsh Military.  She still recalled some of these memories in her later years.  As a teenager, she was a phone operator in England & experienced many stories growing up in the UK during WWII.  Connie became a war bride on September 26, 1945, when she married Charles S. Rhinehart, who was in the Army and stationed in Tavistock, Devon, UK. Upon arriving in the U.S. she worked as an operator for Bell Telephone at AT&T for many years.  She became a member of the Telephone Pioneers upon retiring.

Connie loved daffodils, enjoyed crocheting tea cozy’s, darning socks, and knitting blankets. “Grandma” also enjoyed camping with her family, and especially tea parties with her granddaughters, as well as traveling.  She enjoyed her trips to visit family in New Zealand, England and Wales. “Grandma” took a cruise on the “Queen Victoria” in 2012 with several of her grandchildren. Her most recent trip was in 2014, traveling to visit Family overseas and spending time in Germany and Prague, Czech Republic for her Grandson Chad’s Army promotion.

She was preceded in death by her husband Charlie and son Chuck. Connie will be forever missed by her daughter, Chris and son-in-law Fred, of Washington and son, Craig and wife Debbie of Seattle, Washington; daughter-in-law, Barbara Ariel Rhinehart of Virginia, along with 9 Grandchildren, 20 Great Grandchildren, and 4 Great-Great Grandchildren.

Graveside services will be held privately by the family.  In lieu of flowers, donations may be made in Connie’s name, to the Crohns and Colitis Foundation. Please Click Here to Donate

Share Your Memory of
Constance
Upload Your Memory View All Memories
Be the first to upload a memory!
Share A Memory
Send Flowers
Plant a Tree